About two years ago a couple of chickens snuck into my studio before nightfall and roosted. For those who might not know about roosting, it is a chickens instinct to get somewhere high up (for a chicken) on a branch before the predators start creeping around. These two ladies of the night got up to the highest place they could – a little shelf in the corner that housed a few nature based sculptures consisting of wasp nests, rock and various insects posed curiously together. I was rather digging these sculptures (especially the stick bug and wasp) and had them sequestered up high because they were so fragile. I was trying to figure out how to display them.. Shellac? Under glass? Anyways, they were waiting for their time in the spotlight.

In the morning I found the chickens on the shelf. The sculptures were gone. Eaten. Devoured save their stone bases. My art had become sustenance for my hens. I was miffed but chuckled nonetheless. I mean, c’mon – chickens ate my sculptures. The art eating chickens seemed unperturbed by my chides, and went about their day, bellies full of my creative ventures.

Cut to yesterday and my mission to clean and purge my studio. We are in a purge stage right now, generally speaking. Clothes and things, things and clothes – all being given away, sold or tossed. We have just finished a huge renovation, replacing the 70’s coloured vinyl siding with nice, new board and batten and are about to plunge into re-doing our kitchen. There is no better time to purge as when your whole house is in flux. It feels appropriate and there is an ease to getting rid of ‘albatrossy’ belongings that eludes you when engaged in normal daily routine. The urge to purge spread to the studio and I have embraced the contagion by getting rid of things I have not used or even seen in months or years..

There are corners of the studio that time has left alone. Dirty, dusty corners where flies and wasps go to die and where spiders set up their grisly shops. These corners get swept or vacuumed about as frequently as Haley’s Comet passes our terrestrial blue orb. I was bent on confronting these corners head on with my shop vac. I cleared away piles of dead VHS and DVD players and unused cords for electronics long deemed obsolete. I vacuumed up the detritus comprised of expired flies and daddy long leg spiders. I pushed aside dusty cassette tapes of high school jam sessions which sit waiting in repose for my tape player to work again. I edited the stack of VHS tapes plied high on top of my ‘2000 Toshiba VCR, tv combo. ‘Red Dawn’, ‘MASH’  and ‘Ghost Dog’ survived yet another selection process while ‘Shane’  and ‘Around the World in 80 Days’ were not so lucky.

Behind the TV/VCR combo (which has not been turned on in 2 years but which I plan have repaired very soon) I could see the thickest layer of decomposing insect bodies and poked behind the appliance with my shop vac brush attachment.

This was when my world changed forever.

As I pushed the vacuum brush past the TV and between my treasured Roland studio monitors (also in need of a small repair..) I saw a tiny ovoid shape – dusty but clearly an egg. My mind immediately searched the recent past for a time when the chickens might have infiltrated the studio (they regularly stroll in while i’m painting and I shoo them away). In a fraction of a second I realized the grave nature of what I was confronting but my hand still pushed the vacuum inexorably towards the  avian ovum. I can’t remember exactly what I was thinking as the horror that followed quickly scrambled my thoughts like my brain on drugs.. Something egged me on in that split second even though my spider sense, or, rather, rooster sense was screaming for a moment’s pause to rejig the plan.

The vacuum nozzle approached its intended target in a moment now forever frozen and emblazoned in my mind. Time slowed and as contact was gingerly made, a loud ‘crack’ like a firecracker or New Year’s Eve popper sounded and time slowed further. My mouth formed an ‘O’ and then I moaned a long ‘NOOOOOOOOOOOOO’….

The egg had exploded. It really, literally exploded. Spewing forth spawn from hell. Gamete goo.

Time righted itself and as I braced for what I knew, by all accounts would be an oppressive odour, my comprehension of the word odour widened, expanding to previously unimagined depths. I was suddenly wrapped in a stink so profound that even the most seasoned hazmat suit wearing, corpse cleaning, outhouse wading, corporate pig farm aficionado would reel back, face frozen in a grimace of pure fear and disgust. So intense was this gelatinous mass’ rot (formed over, I presume at least two years) that it had been waiting for even the lightest breeze to disturb its odious reverie of stink. Luckily I was shielded from a direct hit by the speakers and TV. I careened outside like a chicken with its head cut off, emitting a multi-varied cacophony of mewls and howls, peppered with retches and coughs.

‘This is the worst thing that has ever happened’, I thought. I am forever banished from my studio.

My Man Cave heinously tainted, I imagined the life of wandering I would now be condemned to… Never to set foot in my studio again, I’d have to leave behind my guitars, my trusty Rhodes electric piano. All of my writing. Paintings in various stages of completion. All gone. No spring chicken, me, this would all be rather taxing.

I gave my head a shake and bake and faced facts. I’d have to go back into the den of stink and deal with the smell of a million festering arses.  I could not chicken out now.  I considered my options and ended up arming myself with  Coca-Cola laced with tea tree oil in a spray bottle (Coca-cola is an incredible industrial strength cleaner, and though I almost never drink it, I was glad a guest had left a bottle behind). I steeled my will and entered, thinking that I should have stuffed my nose full of mint ( a trick I learned from Rob Saley after he painted a rotting moose carcass somewhere in Gros Morne). First I sprayed the entire infected area with my anti-rot mixture – dousing the whole corner thoroughly. I burned some good Indian incense and waited for the Cola to work its corrosive magic.

The wiping up was not something I’d care to repeat. It took me several passes with various essential oils sprinkled liberally over the entire studio to push back the horrific stench, but eventually by days end I was able to be in the studio without a sustained gag reflex driving me out. Now, the space is back to whatever casual smells I produce in my day to day affairs.

The ‘day of retch’ remains with me still. Some nights I wake up screaming, covered in sweat. I see Sarah sleeping peacefully beside me and I am reminded that everything is ok. The worst is behind us. But somewhere out there, lurking in the shadows, is a soul-stealing smell that I hope none of you ever have to encounter.

Hug your loved ones and appreciate what you have while you still can. And tell your children on a dark stormy night…. Don’t count your chickens before they hatch and always remember….

The tale… of the rotten studio egg. 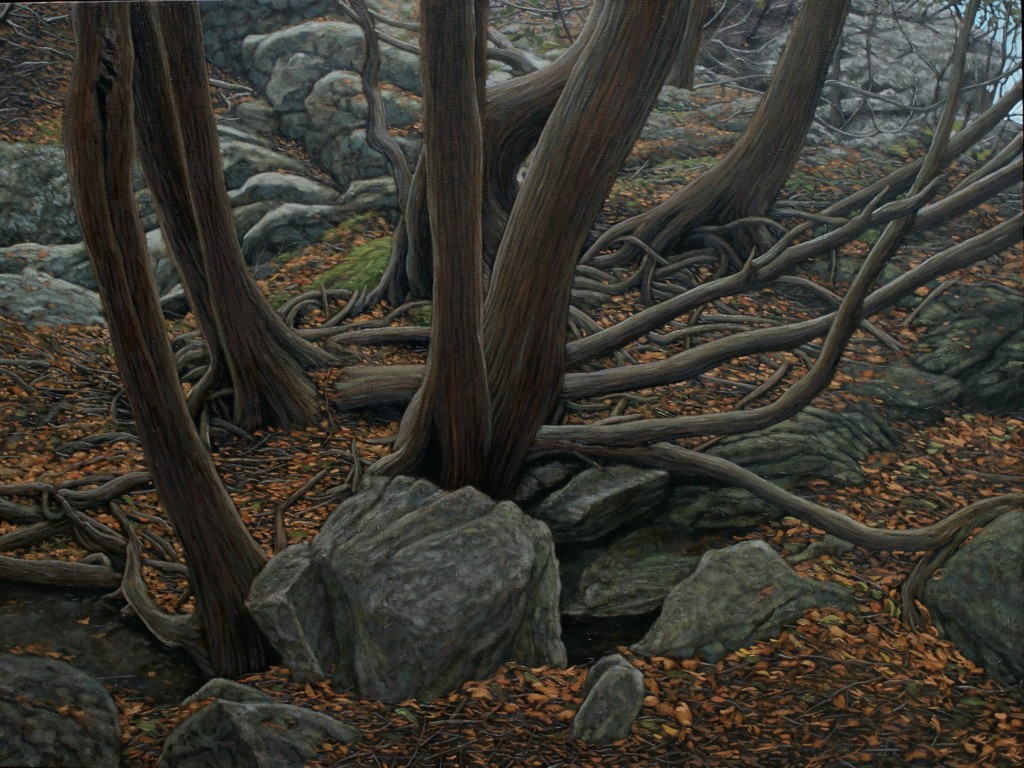 P.S. The piece featured here is somewhere around 8o or 85% done and has been worked on in both a pre-stink and post-stink studio environment. It is from up on Old Baldy, or as we know it, our backyard.